skip to main | skip to sidebar

Welcome to  the deelitefull blog.  I am a cooking and nutrition coach based in Dublin, Ireland.   Food should both taste great and make you feel great. My experience of some healthy eating guides & books is that they can be a little worthy, bland and humourless. Eating should always be a pleasure both to the senses and to the soul. There is nothing worse than eating a meal and feeling like you need a crane to hoist you out of your chair but on the other hand there is nothing more dreary than a meal that is assessed purely on the reduced calories and fat grams it contains. So on this blog you can follow my search for delicious healthy recipes with soul. 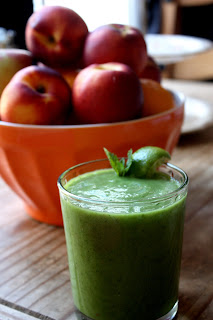 Please don’t dismiss this smoothie without trying it.   For people who are nervous of veggies in their smoothies this is great starter one.
The spinach is a really mild leaf ,  you will hardly notice its there.  In parts of South East Asia they view avocados as something fruity and dessert-like rather than the more savoury view we have of it.   Avocado ice-cream is quite popular there and in this recipe it adds a lovely creaminess as well as vitamin e and lots of healthy fats.
Antioxidants are important to anyone doing exercise as that can help neutralise some of the free radicals produced.  But most importantly it tastes great ,   If you like mojitos you will love these,  okay they are missing the rum but they are really refreshing and good way of sneaking more greens into your day.
I tend to drink this straight after I come in from my run.  Which sounds way more impressive than it is.  For anyone who runs marathons and such like it would be a walk in the park, but for me its more than enough!  I have some lovely running buddies and a really scenic route down around the sea shore nature reserve out to the Pigeon House lighthouse in Dublin.  Some days are easier than others but having this recipe to whizz up when I get in the door certainly makes it easier. 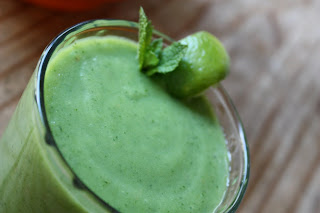 There is no protein in this smoothie so for anyone doing hard core endurance work outs you might need to add some in.  I find I don’t have a huge appetite straight after running but this is perfect and really refreshing.  Then I shower do a bit of work and about half n’ hour later I am more ready for my next breakfast -  usually one of the following in case you are wondering:  poached eggs on homemade  whole meal bread with either tomatoes or baby spinach ,  porridge/home made granola with seeds, yoghurt and berries  or somedays if its very chilly baked beans on wholemeal toast.
The recipe below serves 2 people.  Use just half the ingredients for one person.  (Just rub some lime juice on the avocado and apple you are not using and put a bowl in the fridge wrapped in cling film to stop them going brown.)     Hopefully this will inspire you to go green ;-)
Ingredients to serve
1 avocado
1 apple – cored and roughly chopped ( leave skin on)
a glass of apple juice ( not from concentrate, use pressed apple juice)
a few Mint leaves (trying growing these in a pot,  even I manage it)
Juice of 1 lime
Large handful of baby spinach leaves (optional)
Method
Put all the ingredients in a tall jug or blender and mix until smooth.  You don’t need any fancy equipment a hand blender will work just fine and much easier to wash up.
Posted by Deelitefull at 1:37 PM No comments: 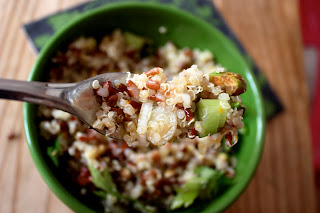 Seemingly the Aztecs went to war on a bellyful of quinoa and considered it a sacred grain.  It supplies significant protein which is unusual for a food considered a grain. (Though  technically it is not a grain but a seed and related to spinach and swiss chard.)  In addition to supplying protein ,  it is also a complete protein, meaning that it supplies all 9 essential amino acids.    Until recently it was only really available in health food shops but it is now stocked by most major supermarkets.
While I am not a fan of the term “super food” as it seems to imply that only exotic foods that are grown on the top of a mountain in remotest Himalayas, harvested by pink elephants using chopsticks are some how nutritionally better than home grown fruit and vegetables.
In reality super food is a marketing term usually used to increase sales.  While goji berries are good for us,  wild blackberries are just as good,  but no commercial interest stands to gain from establishing them as a superfood.  Same with homegrown raspberries ,  they are probably far more nutritious than imported blue berries that have spent weeks travelling half way across the world.
Take the super food label with a pinch of salt,  we should all be eating more fruit and veg but consider seasonal, local ,  sometimes less perfect looking home grown varieties when out shopping.
So enough of my ranting,   I do think quinoa is one “super” food we should try and include in our diet .   This recipe also includes red rice from France,  quite a nutty rice that makes a change from brown, adds some colour and provides a nice contrast of texture with the fluffy bouncy quinoa.   I adapted this from my favourite Ottolenghi cook book making substitutions with the ingredients I had to hand
Red rice and quinoa salad (adapted from an Ottolenghi recipe)

200g quinoa
200g Camargue red rice
2 small onions, peeled and sliced
2 tbsp olive oil/Donegal rapeseed oil, plus a little extra for frying
Zest of 2 orange
Juice of 2 oranges
1 garlic clove, crushed
4 spring onions, thinly sliced
Handful of dried sour cherries( Ottolenghi recipe used apricots)
20g pistachio nuts lightly toasted and roughly chopped
20g of walnuts
Handful of parsley leaves picked
Crumbled feta - 50 g (optional)
Salt and pepper
Method
1. Roast the pistachios at 170C for 8 minutes,  roast the walnuts for 3 minutes and chop both roughly.  ( use a timer when cooking these ,  nuts burn quite easily and they are expensive,  I tell you this from experience)
2. Put red rice in boiling water and simmer for 25- 30 minutes.  In a separate saucepan put quinoa in boiling water and simmer for 12 minutes.  Drain both, refresh under cold water, and leave in fine sieves to drain.
3. While the grains are cooking, fry the onion in a little olive oil until golden brown.
Allow to cool.
4. In a bowl, mix the cooked grains with all the other ingredients including the rest of the olive oil and season generously.   Serve at room temperature.
The feta is an optional extra,  its works quite well with the orangey dressing,(  I think.)  This salad would look lovely also in a big wide bowl served at a buffet lunch.  I ate it with a green leafy salad with asparagus and beetroot.   Lovely filling but light lunch,  you know that lovely balance where you feel full but not heavy.
Posted by Deelitefull at 4:35 PM No comments: